The Truth Shown in “Squid Game”

The lesson to be learned from the dark tragedy in the Korean drama “Squid Game.” 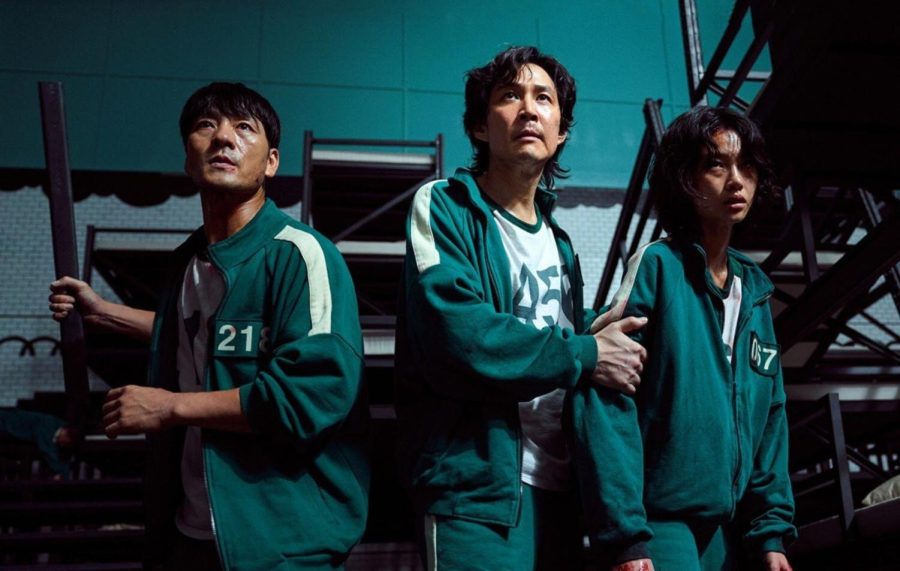 The main character, Seong Gi-Hun, finds fellow companions, and together they fight the horror of their new reality.

On Sept. 17, 2021, Netflix released a dark Korean drama, “Squid Game,” which reveals the darkest side to human nature.

The show starts in Korea, following a hopeless man living in a shabby apartment, betting away all his money, and being chased by horrendous loan sharks. However, a wonderful opportunity strikes him. He could win hundreds of millions of won (Korean currency) for playing a simple children’s game. This enigmatic opportunity soon unfurls itself, showing its endless horror.

Brought to an isolated island along with hundreds of other money-tight individuals found on the streets and threatened by crushing debt, all 400 contestants fight their human instinct, which leads them to betray everything in order to survive. Dark and dreary, the show exploits every broken bit of humankind, alluding to themes like the reality of desperation, betrayal, and the dangers of capitalism.

Throughout the show, viewers are glued to the T.V., watching through the flashing shadows, eerie music, and dangerous aspects of thrilling competition. On a roller-coaster, watchers begin by cheering for their favorite characters, and then despising every move they make.

Viewers are faced with the ultimate question, “What would I have done?”

It is rare to find such a unique and creative show that makes people question their own inhibitions. Considering the way television nowadays creates fast-paced, emotionless drama in lowly teen romances, this show is a treasure in the way it employs heart-wrenching intensity to teach people of life-like pain.

However, society seems to be ignorant of the unique lesson taught in “Squid Game.” People skip over the depth of the show and begin to label characters with the cliche and simple “good guy” or “bad guy” morals.

The point of this show, though, is to prove that everyone is a “bad” guy. Even the main character, Seong Gi-Hun,  ends up betraying what he previously cared about to save his own life, just as all players had done before him. Watchers of the show then blame the simulation that placed them in this situation, yet even that gave the contestants a choice, though unfair because they are led by desperation, to leave and save themselves.

This  leaves only humans to blame. People are synonymous with selfishness, because in the moment of greatest importance, we only dare to choose ourselves.

For instance, in the show, one of the children’s games the characters play ends up forcing them to turn against their closest companion in a simple one-on-one marble game. When Seong Gi-Hun is losing, he has the opportunity to deceive the other player because of an unfair advantage. Thinking only of his own life, he takes the opportunity, and leaves his partner to face death.

Overall, I believe the show “Squid Game” is phenomenal. The story line is so simple, yet twisted with lies and luck. The acting is phenomenal; the emotion can be felt through the screen, and it leaves a hardened imprint on the heart, as if a viewer is experiencing it themselves. I rate it a 10/10; a show everyone needs to see.

When finished with all eight episodes, starting with good humour and ending with horrifying consciousness, everyone can’t help but sit still, breathless.